Ageism has plagued the staffing and recruitment industry for a long time, and despite the introduction of various age discrimination legislation over the years, it is still impacting candidates. Unfortunately, bias is part of human nature – it is usually unintentional but difficult to avoid all the same.

This is why technology can be so helpful during the recruitment process. The good news is that a computer won’t discriminate unless you ask it to. With applicant tracking systems at their disposal, recruiters can remain impartial when setting candidate sourcing criteria.

What is age discrimination in hiring?

Age discrimination in the hiring process involves choosing one candidate over the other simply because they are younger or older. Though many employers may try to avoid age discrimination in hiring, they may become swayed by common misconceptions and harmful stereotypes based on age. The age employers may not want to hire varies by industry. They might not hire someone they think is too young to be skilled enough for the job or too old to have plenty of energy and new ideas.

Research shows that more women report experiencing age discrimination in their workplace than men, especially in male-dominated industries. Age discrimination usually happens when employers and staffing agencies show favoritism toward a candidate despite another having equal or greater skills and experience — whether they’re younger or older.

Examples of age discrimination are when employers prefer younger candidates for their youthfulness and marketable personality or choose older candidates for their years of experience and perceived professionalism. This type of discrimination can affect job retention and satisfaction. Employers, staffing agencies and recruiting companies can all unintentionally engage in this bias.

How big is the age discrimination problem?

Both ends of the age spectrum are affected by age bias, but older candidates come across it most frequently. More than 60% of over-45s have experienced ageism at some point in their careers. Compared to those under the age of 28, over-50s are more than twice as likely to remain unemployed for two years or more if they leave their current job.

The impact of age discrimination on younger candidates has been harder to measure, but it is widely believed that “reverse-ageism” is an increasingly prevalent behavior among employers. Some research shows that employees under 34 are more likely to witness or experience ageism at their jobs than their counterparts over 55.

However, it’s fair to say that age discrimination against older adults can have more detrimental effects. Other studies show that 29% of households headed by someone age 55 or older have no pension or retirement savings — leading them to continue working or rely on Social Security. With ageism preventing them from securing skilled jobs above minimum wage, it can be challenging to plan for their future.

Either way, rejecting candidates based on age can lead to a lack of diversity in the workplace and tarnish an employer’s reputation. 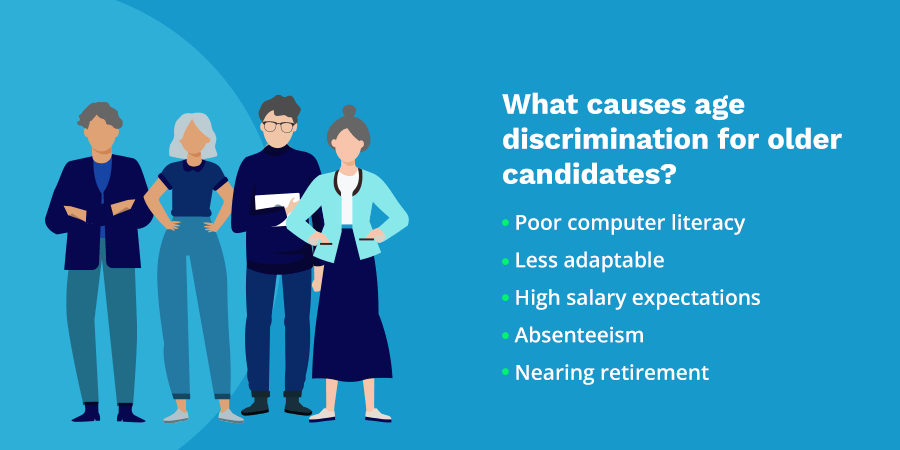 All types of discrimination are largely based on misconceptions. Stereotypes are a key driver of age bias within the recruitment process and vary depending on the age group in question. Recruiters and employers can overlook older job applicants for several reasons, many of which are born from unfair assumptions.

Most jobs involve at least some interaction with technology, and many employers may be quick to assume that the older generation lacks the competency required to operate the relevant computer systems. This is a dangerous assumption, as an experienced individual is likely to have encountered a wide range of software over the course of their career.

Recruiters will sometimes question the adaptability of older candidates, particularly if they have spent a large portion of their career in the same role. This should not be a reflection of a candidate’s willingness to learn new skills — older employees are generally very dedicated and hardworking.

Employers sometimes assume that older, more experienced workers are likely to demand a higher salary than their younger counterparts. This is not always the case — many candidates will have reached a stage in their life where they are no longer driven by earnings and instead desire to learn a new skill or follow their passion.

A popular misconception is that older people might have to take more time off due to illness. However, older workers generally take fewer sick days than younger colleagues and are more likely to stay with an employer longer than a 20- or 30-year-old.

Employers looking for long-term placements often shy away from recruiting older workers due to the risk of retirement. The last thing a company wants to do is hire a candidate who will leave them shorthanded again in the near future.

However, the reality is that not everyone over the age of 50 is getting ready for retirement — far from it. Financial pressures have led to more people working beyond retirement age. In the United States alone, there were nearly 10 million workers aged 65 or older in the workforce or seeking work in 2020. Studies have shown that many workers over the age of 60 intend to delay their retirement. Many older employees still enjoy working and engage more with their careers to avoid retirement.

For younger candidates, the problem mostly stems from the opinions of senior managers involved in the hiring process. While age discrimination may seem more likely to happen to older adults, younger people’s experiences of ageism have been largely overlooked in research and policy-making.

While experience does generally come with age, it is common for younger workers to develop expertise quickly through on-the-job training. Candidates in this age group also benefit from switching positions regularly through the early stages of their career, gaining exposure to different roles and work environments in a relatively short time.

Many workplaces reward seniority over talent, creating a barrier for young candidates because hiring managers often dismiss them as overly ambitious and overconfident.

Change can be deeply unsettling for senior management, and any ideas put forward by younger employees are frequently deemed to be too radical. An ill-conceived perception of entitlement can also damage older employees’ trust in younger counterparts.

Young candidates have been labeled a flight risk due to the current job-hopping trend. What recruiters need to remember is that this is not a new phenomenon — U.S. Bureau of Labor stats indicate that the average tenure for workers in their 20s is the same now as it was in 2010.

Gen Z and millennial workers move around in search of experience and development opportunities. Instead of avoiding candidates from these groups, employers should ensure they have a solid progression path for entry-level staff, reducing the need for them to go elsewhere as they climb the career ladder. 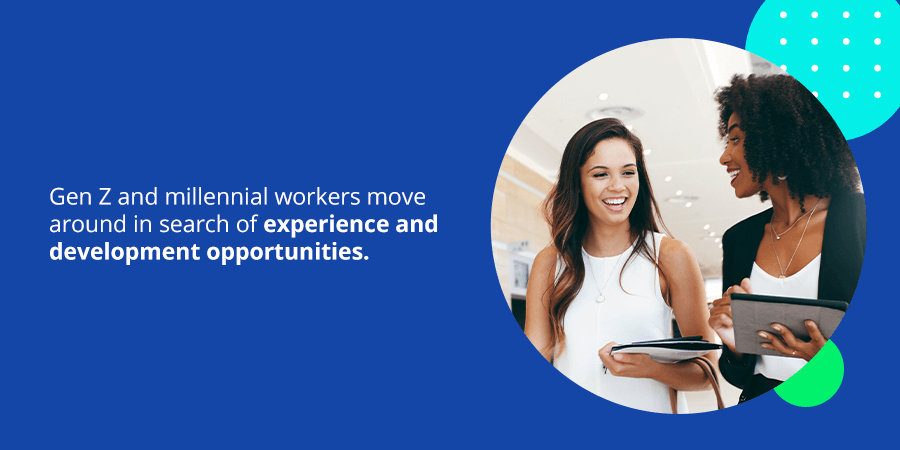 Younger generations are often accused of being lazy, disrespectful and rude. Most of the time, this criticism is due to a clash of generational norms, such as communication style, body language and even dress sense.

What legislation is in place to prevent age discrimination?

Countries worldwide have introduced their own employment legislation to combat the issue of ageism. The United States passed the current Age Discrimination in Employment Act (ADEA) in 1967, but employer compliance is still inconsistent. The ADEA only protects workers over 40, leaving younger people to fight to obtain or keep their jobs if employers seek older and more experienced staff members.

The Equal Employment Opportunity Commission (EEOC) is a federal agency that works to enforce this law and investigate age discrimination in the workplace. However, many people feel thousands of age discrimination claims never see the light of day. An analysis showed that the EEOC only brought 10 discrimination lawsuits in 2018.

Additionally, it often takes months for a worker to file a complaint and resolve their suit, leaving many to wonder if the hassle is worth it. Older workers who face ageism in the workplace may not even report it because of the challenges of proving age discrimination when charges are filed. However, in 2020, the EEOC filed 93 lawsuits accounting for all types of discrimination, which shows a potential surge in protecting workers against this prejudice.

Today, even the world’s largest corporations have become embroiled in legal action. For example, Google and The LA Times both settled lawsuits in 2019 with millions in damages due to age discrimination.

Studies show that age discrimination exists in several industries, including:

Studies show that by the time workers reach age 38, 35% feel they are too old for their role due to pressure from their colleagues, and 32% are afraid of losing their job because of their age.

Older staff members in the tech industry are also more likely to have their hours reduced and are the most likely group to lose their jobs and experience long-term unemployment.

As to why the tech industry is so ageist in the first place, the primary challenge is strong stereotypes of tech workers. For instance, there’s a common perception that youthful professionals have more tech fluency and can work harder or learn new skills faster than their older colleagues. Additionally, many tech start-up companies seek to hire workers who will accept a lower wage, which can be a deal-breaker for older people with families.

Other common stereotypes in the tech industry include the following:

Additionally, most tech companies value a working environment that gears toward a younger lifestyle, including parties, games and snacks. Workers over 40 with family responsibilities may have difficulty relating to this lifestyle and feel it doesn’t fit their priorities. 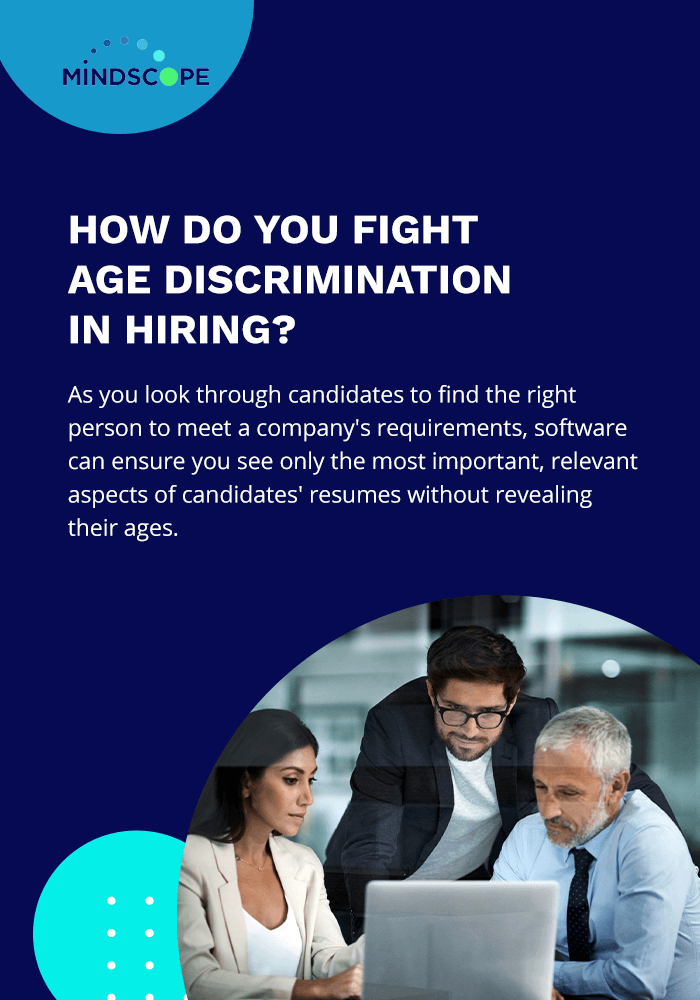 How do you fight age discrimination in hiring?

When workers seek and apply for jobs online, many aspects can create discrimination and disqualify them from getting the job, including:

Recruiters and staffing agents must find the person that best suits the role their clients are looking for — regardless of age. It can be difficult to remain impartial if recruiters consistently look at specific age ranges for particular jobs, such as in the tech industry.

As humans, it’s common for us to unintentionally think of stereotypes when we think of older or younger employees in the workforce. However, this discrimination can prevent a truly qualified and dedicated worker from filling a much-needed role. One of the best ways to fight age discrimination in hiring is to rely on technology that can remove any bias.

As you look through candidates to find the right person to meet a company’s requirements, software can ensure you see only the most important, relevant aspects of candidates’ resumes without revealing their ages. Your recruiting agency can improve and streamline your process using the right features to avoid discrimination against candidates and help you make more placements.

How can applicant tracking software help?

Technology is a simple way to remove recruiter bias from candidate sourcing. Mindscope’s applicant tracking software gives recruiters a head start by allowing them to accurately parse information from resumes into individual candidate profiles within the database. From there, it becomes easy to filter candidates based purely on skills, qualifications and experience.

Mindscope will automatically calculate the number of years’ experience an individual has in their particular field, as well as provide a summary of qualifications and educational background. All of this information then becomes filterable as part of the database search function.

Mindscope’s Boolean advanced search feature can be used to specify multiple criteria that focus solely on the requirements of the job. This maintains impartiality regarding candidate age and improves the chances of finding someone who genuinely suits the role.

To learn more about how Mindscope’s recruiting software can transform your approach to staffing, get in touch.

Although the economy has been propped up throughout the pandemic, strain is starting to show with record inflation tightening…

How to Improve Your Recruiting Process

The success of any organization relies on the right talent and teamwork. Staffing agencies understand how recruiting can feel like…

Deploying technology to enhance the recruitment process is critical for every recruiting and staffing agency. Light industrial staffing agencies can…